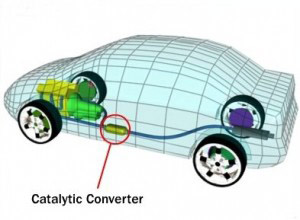 What's the one thing you would expect car burglars to steal when they break into your car? The car stereo, a cell phone, or that loose change you keep in the ashtray? All of these things may be, but would you think they would steal your catalytic converter?

Your vehicle's catalytic converter is a device used to reduce the toxicity of emissions from an internal combustion engine. Catalytic converters have been required by law on every motor vehicle operated in the United States since 1975. It is attached to your exhaust system and is located underneath your car. Catalytic converters contain expensive precious metals like platinum,palladium andrhodium.

Catalytic converter thieves generally target high profile vehicles like trucks or SUV's because the higher ground clearance allows for easier access underneath the vehicle. However, sports cars and sedans are not immune to converter theft. Currently we are seeing Toyotas being targeted,specifically the Prius.

So what can you do to protect your vehicle? Below are five prevention tips that can reduce your risk.